Dylan Cozens has always owned a fierce competitive streak. When his parents signed him up for soccer as a four-year-old in Whitehorse, he had no interest in introductory games like Duck, Duck, Goose or Ring Around the Rosie. He wanted to play the game. Public skating wasn’t his thing either. With no stick and no puck, what was the point of strapping on skates? His father, Mike, would bribe him: if Cozens did a lap of the rink or skated hard between the blue lines, Mike would give him some Smarties.

That desire to compete hasn’t waned. In fact, it’s what scouts and hockey pundits love about him. Cozens, now 17, is a big, goal-scoring forward on the Western Hockey League’s Lethbridge Hurricanes, and his tenacious play has made him a projected top pick in next summer’s NHL draft. It’s been a long and impressive journey for a kid from the Yukon—a territory that can only claim two players who made an NHL roster. 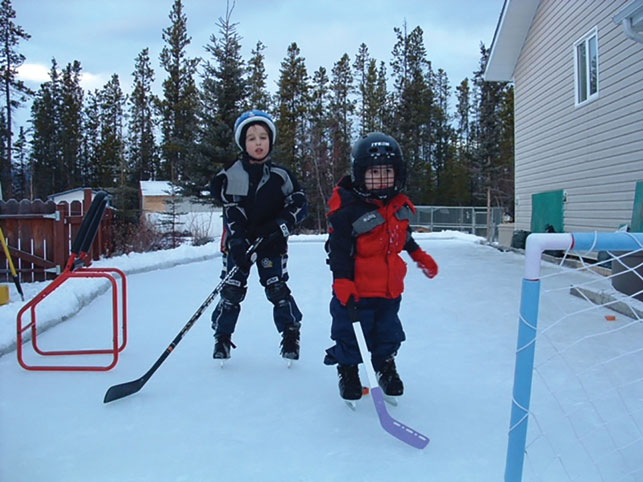 Cozens learned to skate when he was three, on a rink his dad, a territorial judge, made in their backyard. It’s a family tradition: Mike’s father, a Toronto Marlies goalie in the ‘50s, did the same for him growing up in Québec. As Cozens and his two younger brothers grew, so did the size of their rink—and the height of the boards, to protect the house from slapshots. There, they spent the cold, dark nights, their parents bringing them hot chocolate and snacks. “It was awesome and definitely a big part of my success so far—growing up and being able to go on the backyard rink whenever I wanted to,” says Cozens.

He started organized hockey at five, and longtime coach Martin Lawrie says Cozens wasn’t a strong skater at first. This might have had something to do with one of his feet, which was slightly turned in. His parents took him to the Child Development Centre, a non-profit that offers various therapies for kids, where they were told his foot should correct itself as he grew. And it eventually did. In the meantime, they tied his skates looser and that seemed to help.

Cozens played other sports like volleyball and softball, but hockey was always the clear favourite. “Dylan was a typical rink rat,” says Lawrie. He’d hang around the arena after his games for a chance to sub on other teams if they were short players.

At nine, Cozens started playing rep hockey, travelling outside the territory to play southern teams. At one tournament, his mother, Sue Bogle, remembers the 12-year-old scored 21 goals over the weekend, and his team won gold.

Then he broke his leg. Weeks after his southern scoring spree, he was playing at Whitehorse’s Takhini Arena against a men’s house-league team when a grown man collided with Cozens and sent him into the boards. He didn’t get up. “It was a scary moment,” says Bogle, who rushed onto the ice before the ambulance took him away. Cozens, who comes off as reserved and quietly confident, is nonchalant about the hit now, but admits playing with adults was intimidating. “They were all big and strong and I was just this little 12-year-old.”

The Yukon, like other smaller or remote regions, has a limited pool of players. On rep teams, Cozens often played underage, meaning opponents and teammates could be two to four years older than him. For instance, at 13, he played on the rep team for 15- to 17-year-olds. As he got older, Cozens needed more competition to get better.

This would mean leaving the Yukon to attend a prep school down south, something many teens in the territory have done over the years in hopes of furthering their hockey careers. Still, it was a difficult decision for his family to make. “If we don’t give him this opportunity, is this going to be a lifetime of regret?” says Bogle. “As a parent, you just want to give your kid every opportunity. And people were telling us he has potential to do well, but he needs to be out there. He needs to be seen.”

So, at 14, Cozens moved to British Columbia to attend the Delta Hockey Academy. “Being such a young age, it was super hard to be away from my family for that long,” he says. “But the hockey there was really good, the school there was really good. They helped me develop so much.” The next year, Cozens was drafted by the Lethbridge Hurricanes in the WHL, one of Canada’s major junior leagues that develops future NHLers. Since he was too young to get on the Hurricanes’ roster full-time due to the WHL’s age restriction rules, he played for the Yale Hockey Academy in Abbotsford, B.C. 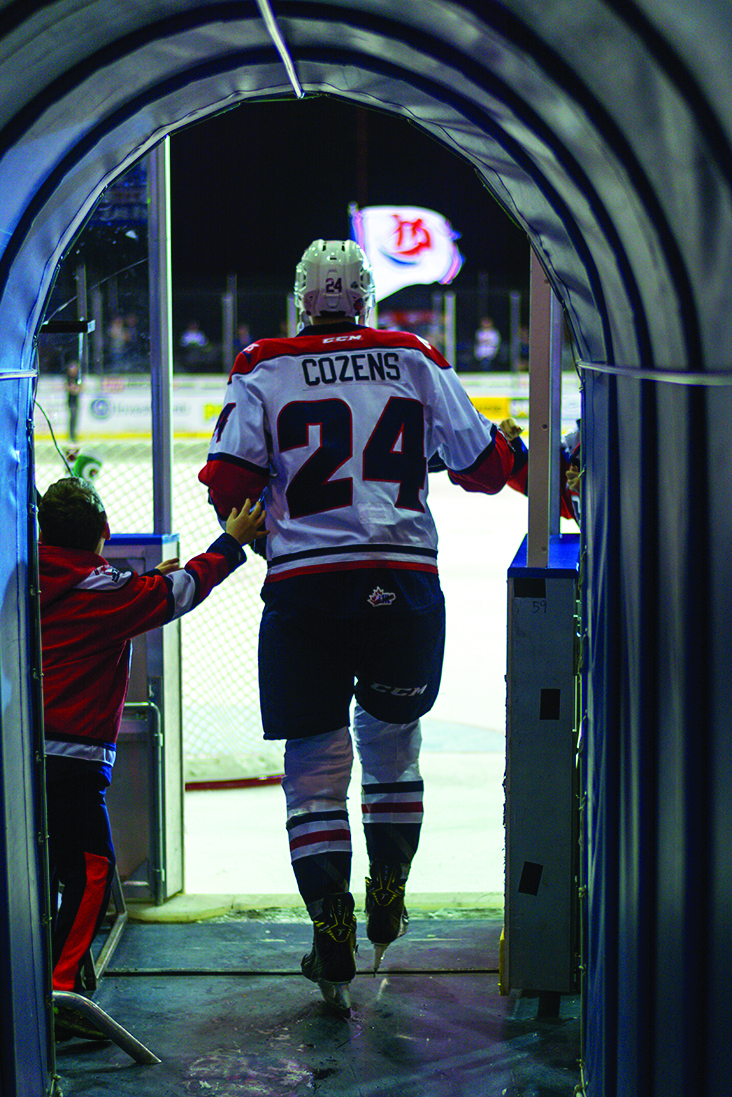 This year has been a big one for Cozens. He won WHL Rookie of the Year after his first full season with the Hurricanes and took home gold playing for Team Canada in the Hlinka Gretzky Cup (an international under-18 tournament), scoring a big goal in the final second to send the semi-final game against the U.S. into overtime.

Cozens has always had his sights set on the NHL. “That’s every kid’s dream who plays hockey,” he says. “Now that it’s becoming more realistic for me, it’s just crazy to think of where I came from and how it all happened.” Hockey’s talking heads have penciled Cozens in as a top-ten pick in next summer’s NHL entry draft. Players taken that high in the draft often become stars in the league.

For his dad, a hockey lover, the experience has felt surreal. “We all hear the stats: one out of every so many hundred thousand kids even gets a game in the NHL,” says Mike. “We’re aware of that, but we’re also aware of, well, someone makes it every year. So they gotta come from somewhere.”

At one time, Bogle’s best-case scenario was that Cozens could get a university scholarship and an education by playing the sport he loves. (Cozens was offered a full scholarship to the University of Denver but turned it down to play in the WHL, seeing it as a better route to the big leagues.) “I never thought the NHL was a possibility,” says Bogle. “No one’s ever gonna make that, especially not a kid from the Yukon, right?”

Since Cozens moved away, the hockey landscape in the territory has changed. A new team called the Yukon Rivermen has formed, part of the B.C. Hockey Zone Program, to provide 13- and 14-year-olds with an opportunity to play more competitive hockey without having to leave the Yukon. One of Cozens’s brothers played on the Rivermen, though at 15, he moved away to attend an academy in Edmonton.

A few years ago, Cozens might have seen his upbringing in the Yukon as a setback, but now he sees the benefits: the long, cold winters that allowed for a backyard rink, his big support base—people stop his parents on the street to congratulate them—and the fact that he stands out, being from a unique place. (Though he has fielded half-joking questions about iglus and polar bears.) “There are lots of people who are rooting for me, lots of people I want to make proud,” says Cozens. “There’s definitely some pressure that comes with it too.”

To deal with these expectations and the draft-year pressures, he meets weekly with a mental-performance coach. This is in addition to the hours of daily practice, part-time classes, and his team’s two to three games per week, often coming after hours of tedious bus travel. “I just want to be able to play my best every night and just get better every day,” he says.

And that’s because Cozens knows people are always watching him play—and not just back home in the Yukon anymore.

How the Arctic figures in southern fires and floods

PHOTO BY UP HERE

It could’ve been a classic. So why did a high-flying NWT musical miss its chance?

Churches as galleries and school gyms as concert halls—art spaces and performance venues are hard to come by in the North. But art-lovers in each territory make do with what they have.

“It Was There All The Time.”

With a low tolerance for boredom, Inuk master artist Germaine Arnaktauyok has followed her creative ambitions and love of Inuit legends wherever they took her, in a career that has inspired books, films and even acrobats.

In a land where temperatures regularly drop to 40-below, real fur products continue to keep Northerners from shivering in the cold.

Million-dollar views. Wilderness at the doorstep. Big communal spaces to gather in. Here’s what Northerners want from their dream homes.

The Dome Homes of Bathurst Inlet

True, most of the humble and hastily built dwellings that helped trappers and settlers get through a winter or two have crumbled. But log houses constructed with love and attention still dot the urban landscapes, as some Northerners fall for homes with a more natural feel.